My son, Mitchell, graduated from Colorado College the other day at the age of 22.  Congratulations, boy…I’m proud of you!  Like most college students, Mitchell had a tendency to “party” when the need arose.  Case in point—an April 2012 trip to Las Vegas with nine women.  Originally, a couple other guys were scheduled to accompany the nine girls and one guy to Sin City.  However, the other guys bailed at the last minute, leaving Mitchell alone to endure a healthy heaping of estrogen, perfumed sun-block, and oversized sun hats that did everything to shield the rays of sun on the female face, but nothing to shield the lower 80% of the female body sitting on a chaise lounge by poolside at the Mirage hotel.  Mitchell was fine with that group dynamic.

What Mitchell wasn’t fine with, however, was the detrimental effect that nine women had on his ability to count cards in blackjack during the four-day trip.  He couldn’t concentrate.  Could you?!  The girls just wanted to have fun.  To them, blackjack = no fun.  To the nine girls, “fun” meant other things, like dancing and flirting and cavorting.  Just look at the following picture, which was taken on the reflection of a mirrored ceiling in a Las Vegas hotel elevator.  Can you spot the one guy (Mitchell) who didn’t think it was a fun idea to smile at the ceiling?  Can you also spot the one guy (Mitchell) who instead was waiting for the doors to open near the blackjack pits? 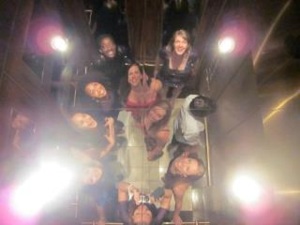